Some Songs In My Crochet Music Playlist

I'm straying away from the typical crochet post here. I know you've seen me in my crocheting pictures amid scenic tropical backgrounds, but you haven't really seen me crochet at home. I won't scare you (for now) by posting a picture of me in my unhipster(ly) thick eyeglasses wearing some shirt I must have worn during P.E. class in high school. 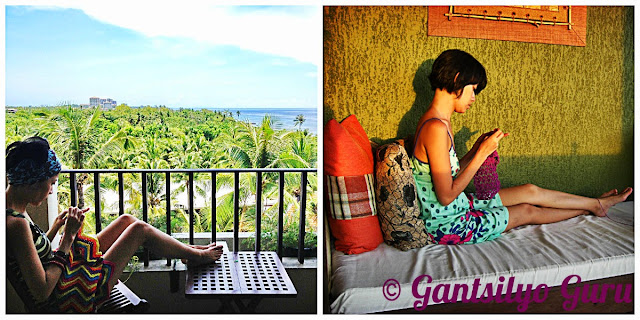 When I crochet at home, there's always the TV or there's music on. When the TV's on, for some odd reason, I like having CNN or the ANC News Channel on. It's multitasking, come to think of it. Being up to date with the latest news happening in the country and around the world while crocheting stitches that at the end of the day will have no impact whatsoever to the affairs concerning humanity.

Then there's music. I love listening to music. I don't choose one particular genre over the other. If it clicks, it clicks. Sometimes, I am influenced by friends who happen to love a lot of the blues and rock and roll. Sometimes, I just like listening to boy bands. Sometimes, I like it loud. Sometimes, I want it to be the kind of music you want to listen to while lying down and staring at the cracks of your ceiling. It really depends on my mood. I just want to share with you some of the songs in my crochet playlist. One thing in common about all these songs is that I love singing along with them.

Icona Pop - "I Love It"
You don't want to hear me singing this song while crocheting. Cray Cray in the house. Makes me feel cool while doing the grandma-ish stuff.

Bonnie "Prince" Billy - "I See A Darkness"
The video's a bit freaky, but I like the message of the song.

Click the link below for more songs in my playlist!


Imagine Dragons - "It's Time"
I discovered this song even before it became part of the soundtrack of "The Perks of Being a Wallflower" movie (yes, I am claiming I am cool). This is the version I heard before the album one. I love it!

Cold Specks - "Winter Solstice"
If Norah Jones and Skin (of Skunk Anansie) had a child, it would be Al Spx (the vocalist). I love her voice! It's so soothing. I don't recommend this though if you're crocheting in the middle of a boring row or round - it can lull you to sleep.

Neon Trees - "Animal"
A friend introduced me to this version. Rawr.

Volcano Choir - "Repave" Preview
This is a new one. This is not even the entire song, but it is so awesome it makes me want to cry. The fact that Justin Vernon of Bon Iver is involved in this makes me want to cry. I can imagine crocheting to this especially when I'm about to reach the last round. It's like saying, "Rejoice! Rejoice! You are almost there!"


Jim Jones Revue - "High Horse"
This song makes me want to roll around and summon the gods of rock to go down to earth and possess my crocheting hands. It can be distracting though because you can lose count of your stitches if you listen to this. I like this live version on Letterman.

Led Zeppelin - "Kashmir"
There's always a Led song in my playlist. There's always a lot of nodding while I crochet with any of their songs. Makes me feel bad ass with any doily I'm working on.
Posted by Gantsilyo Guru at 21:11