Coming Out of the "Crochet Closet" 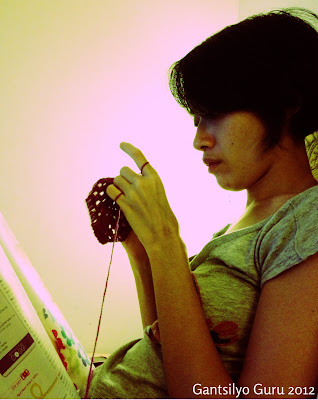 I started crocheting in high school. Between then and now, I've been pretty much "hiding in the (crochet) closet." I think most of my friends know I crochet but I used to be quite shy or maybe ashamed in saying that I seriously love crocheting. They didn't know I have a library of crochet books and loads of yarns - and that I actually consider having emotional attachments to crochet especially when I turned to it on some depressing fits.

I also remember a guy friend telling me, when I was single, not to tell any guy I'm going to date that I crochet. Dang, deal breaker :p I don't know if guys are imaginative enough to conjure up an image of me crocheting while sitting on a rocking chair and wearing my glasses. I guess the first thing people think of when they hear the word crochet is "grandma" or "doily."


I also had a short conversation with Kimmy of Yarn Source Manila about crocheting outside the confines of your own room - where people can actually see you crocheting. Lola in the house! It's nice to go along with the "lola" teasing because when you continue crocheting in front of them, they become more curious on what you're doing and somehow it shifts the focus on the process and the craftsmanship that it takes to get you to the finished product. I eventually built up the guts to crochet in public because at the end of the day, it's my shit, not theirs :)

I don't know if it's because of the recent wave of craft gatherings or this renewed appreciation of handmade stuff that people are beginning to see how cool crochet can be, and how cool the crocheters can be. Maybe it's also because of social media, of the Facebook pages and Pinterest pins showing overwhelmingly beautiful crocheted creations. I practically came out of my crochet closet with this blog and my decision to create possibilities with it. I thought I was alone in having a deep appreciation for this craft in the country. I didn't expect we were so many out there!

And going back to crocheting being a deal breaker, that wasn't true :p When my (future) boyfriend and I were dating, he gave me a set of crochet hooks (with a case, mind you) for Christmas. I almost died and gone to heaven when I saw his gift. That pretty much sealed the deal :p

Crocheter and Proud! Woot!
Posted by Gantsilyo Guru at 22:03